Me and Laura Humppila have been working with a dance piece for nursing homes. From the couple of gigs we have had so far the reception has been pretty awesome! Really trusting and hoping that the performances will keep on going for a while! The working process itself has been very much collective with Laura having a bit more say in directing and respectively I've had a bit more work with music and sound.

The piece is based on thoughts on happiness from elderly people themselves. Interaction is one part of the performance, but there is also a story to follow and a choreography to see. The basic working premise has been to give all the audience members a chance to enjoy the dance and movement with their own pace, and to have a possibility to move oneself as well. Name of the performance could be translated as "Happiness Inside Me" 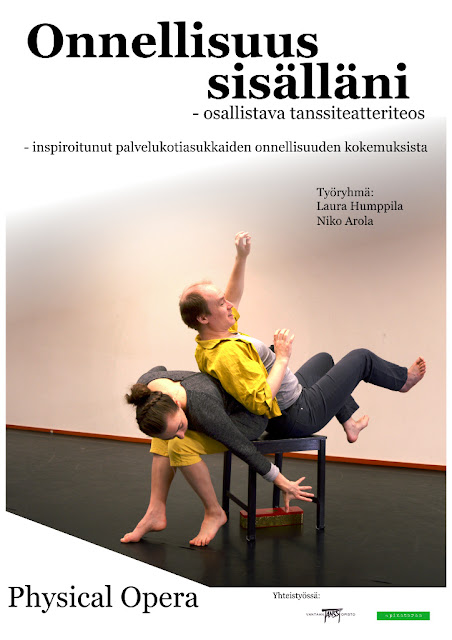 at 12:35 AM
Email ThisBlogThis!Share to TwitterShare to FacebookShare to Pinterest

In addition to dancing I try to make my own music from time to time. At the moment this music eventually finds it way for example to be soundtrack for my videos or as beats for the classes I teach. I have also made soundtracks for the performances of my students - especially for the younger kids since this gives me more control for the length and themes of the music. At the moment I wouldn't call myself a musician though.

As tools for the music making I'm using Ableton Live in addition to a couple of midi controllers. With these I can work with both recording live playing and writing music as notes. I have a tendency to think of my music composing in similar ways as I compose movement, and both tend to influence each other.

This is an ongoing project, but I'd like to share something of it. I made this track as an exercise to study some melody creation, modes, scales, and I also initially thought about creating something that sounds positive and happy (as I tend to lean for more serious, sad or even "scary" sounds if I just let myself go with the flow). The happy part didn't quite work out as intended though.


at 7:02 PM
Email ThisBlogThis!Share to TwitterShare to FacebookShare to Pinterest

Here is a quick list of the dance schools where I'll be teaching classes in the Autumn 2017. Maybe you'll find a spark to start a new hobby, or you'll find the info in the case you or your child is continuing dancing! Old and new students are all very welcome! You can find the most up-to-date information on the sites for each dance school:

at 3:02 PM
Email ThisBlogThis!Share to TwitterShare to FacebookShare to Pinterest

It's been quite a while since the last update, but better later than never. I'll call this the summer update since it finally appears to be somewhat safe to assume that it is summer even in Finland (still quite chilly but no more sense of an approaching hail).

Since most of the dance schools are on holidays and I'm not having a tight schedule at the moment, It's been a great time to slow down and prepare for the coming autumn (It feels like a change of the year although the calender year is in it's middle). In addition to slowing down and planning I've also had a chance to practice and get some new inspiration. I spent last week in Notafe - a smallish dance festival in Viljandi in Estonia - seeing a lot of performances and taking part in some inspiring workshops (Dramaturgy by Peter Stamer and Play-Fight by Bruno Caverna).

Something's certainly boiling again and hopefully I'll have something concrete to share sooner than later! At least I'll be informing soonish about upcoming classes in different dance schools for the autumn. Have a great summer!!!

at 4:41 PM
Email ThisBlogThis!Share to TwitterShare to FacebookShare to Pinterest

Performing with Fearless Warriors of the Roseland

A friend asked if I could come and dance in their band's gig at Korjaamo in Helsinki. I have been itching for a chance to perform, so of course I had to accept the offer! Today after teaching my saturday classes I had a great time preparing some ideas and movement. The gig will be on tuesday 25th October. If you happen to be in the city, you're very wellcome to come and listen to some great music and to see what kind of dance scores and improvisations will manifest there.

More information about the band Fearless Warriors of the Roseland: http://juanpino.dk/music/fearless warriors.html

at 4:37 PM
Email ThisBlogThis!Share to TwitterShare to FacebookShare to Pinterest

Warm welcome to my new site! This is the first post of the site so some introductions are in order. I'm a dancer and dance teacher from Helsinki Finland, and through this site I'm intending to share my work, ideas and projects that I'll be working with. Above you can find a menu with pages where you can read about me, what sort of performances and workshops I'm offering at the moment as well as some media links and contact information.

I'm developing my artistic and pedagogical practices all the time, and my intention is to use this site as a central platform to share my thoughts and results through text, video and links. I will also keep my information updated whether it is where to find me working and with what, or how my performance and workshops concepts are developing. At the moment you can find my dance classes in a couple of dance schools and projects around Helsinki area (Keski-Uudenmaan tanssiopisto, Porvoon tanssiopisto, PopUp Sipoo and Espoon tanssiopisto). At the same time I'm also a freelancer, so if you are in need of a dance artist, feel free to send me a message!

I'm a dancer and dance teacher located currently in Helsinki Finland. I have graduated as a dance teacher from Turku Arts Academy in 2015. Currently I'm working with developing my artistic practice in the work field. I'm a member of Art Cooperative Monkey Garden. You can find me teaching around southern Finland. Please explore my site for more information!

What to look for?